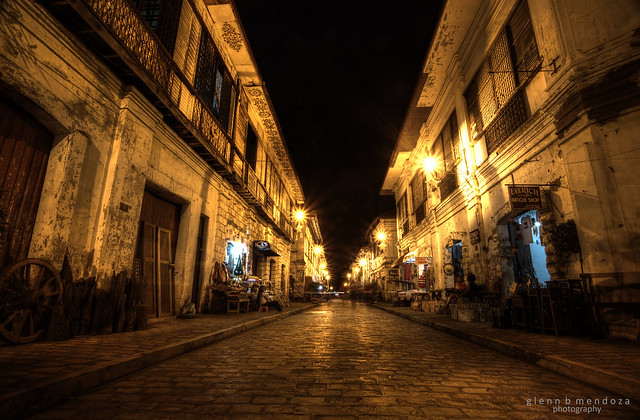 Vigan City is a World Heritage Site in that it is one of the few Hispanic towns left in the Philippines, and is well known for its cobblestone streets, and a unique architecture that fuses Philippine and Oriental building designs and construction, with colonial European architecture.

Even before the Spaniards came, Vigan was already a trading port. Chinese traders sailing from the South China Sea usually came to Isla de Vigan (Island of Vigan) by the Mestizo River that surrounded the island. They used to trade with the local settlers golds, beeswax, and other mountain products.

Between 1645 to 1660, Vigan was divided into 21 “Cabezas de Barrio” (Town Mayors) as mentioned in the Libro de Casamiento (Book of Marriage); from the records of the parish house of Vigan found in its Archives. Separated from the indigenous population, the Chinese migrants were residents in a neighbourhood called El Pariancillo, los Sangleyes del parian (The Sangleyes of the Parian); and the Spanish settlers were residents in a town called Los Españoles de la Villa (The Town´ Spaniards).

Vigan City’s 2,511 hectares of land consists mostly of plains with gentle hills. Its boundaries on the north, east, south, and west are the municipalities of Bantay, Santa, Caoayan, and Sta. Catalina, respectively. The South China Sea is on its southwest portion.

Majority of its land, 60 percent of it, is used for agriculture. Around 32 percent is made up of residential area, nearly three percent are for commercial and industrial use, and around one percent is for institutional purposes. There are also forest reserves and fishponds included in Vigan’s land area.

The city is the trading hub of the province but agriculture is still the mainstay of the local economy. Main farm products include rice, tobacco, rootcrops, vegetables, livestock and poultry. Fishing is an important source of income especially in the coastal area. Fishponds are also sources of fish supply for the city. Vigan is well-known for its jars called burnay. It has a long tradition of making bricks called Damili. These materials were used to build the colonial houses and churches not only in the city but also in the region. Another popular cottage industry is the Abel-weaving from which fine fabrics are produced. Prominent personalities in the city and province are helping in the revival of this industry. With much help from the government, tourism is now playing an increasing role in the economy of the city.

The city offers much potential to attract small, medium and large enterprises. The processing of agriproducts hold as much promise as a viable enterprise in the city. Manufacturing construction materials can also be profitable consideraing the central location of the city in the region. The establishment of world-class tourist facilities is very much encouraged. Vigan hotels and accommodation are growing in the area to accommodate such tourist and visitors in the city.

Vigan City itself is already a tourist destination. You can see anywhere, the Spanish-time houses and streets. There are also calesas (horse-drawn buggy) which offer you a ride anywhere in the city. Lots of stores selling souvenirs are also in the street of the city.

This place is known as Mestizo District, where the streets are lined with Spanish Era ancestral houses (all with Spanish time tile roofs, massive hardwood flooring, balustrades and other in varying Spanish, Mexican, and Chinese architectural styles). There are also cobble-stoned streets, which led to Vigan’s inscription in the list of UNESCO World Heritage Sites.

A zoo located in Salindeng. There are variety of animals (including tigers and ostriches).

Dedicated to the memory of th great conquistador Juan de Salcedo. This place is also the site of Gabriela Silang’s public hanging in 1763.