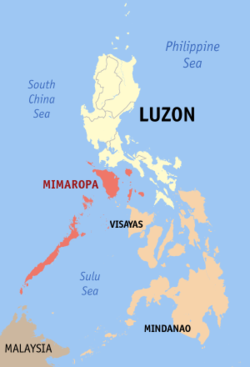 MIMAROPA is an administrative region of the Philippines. It is one of two regions of the Philippines having no land border with another region, Eastern Visayas being the other, and is designated as Region IV-B. The name is an acronym combining the names of its provinces, which are: Occidental Mindoro, Oriental Mindoro, Marinduque, Romblon and Palawan. The region is also more formally known as Southern Tagalog Islands.

There are, as of now, two cities that make up MIMAROPA Region: