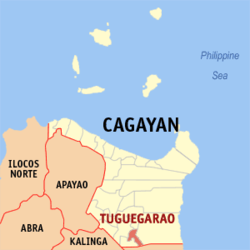 Tuguegarao City is the main entry to the Province of Cagayan. It has a total area of 144.80 km2 and lies in the south central tip of the province. It is approximately 483 kilometers north of Manila, about 65 minutes by air travel and about 10 hours by land, through the Philippine-Japan Friendship Highway, also known as the Maharlika Highway, which is the region’s trunk line road and which runs parallel to the Cagayan River.  Tuguegarao City is bounded by Iguig, Cagayan on the north; by Peñablanca, Cagayan on the east; by the Province of Isabela on the south; and by the Cagayan River on the southwest and west. Across the river, the towns of Enrile and Solana are located to the southwest and west, respectively of Tuguegarao City.  Using the Saint Peter’s Cathedral Tower as landmark, the city’s geographical coordinates are 121043’46” longitude and 17036’54” latitude. It’s plain coordinates are 20,011.95 north and 20,106.67 east.

Main farm products are rice, rootcrops, vegetables, poultry, and hogs. There are some fishponds within city limits and the Cagayan River provides some of the fish supplies of the residents. Like many other small cities in the Philippines, industries consist mostly of furniture and automotive shops, hollowblock making, bakeries, rice mills, dressmaking, and food processing.

Within the past three decades, its economy gradually shifted from agriculture to secondary/tertiary economic activities such as trading, commerce and services. The shift was ushered by Tuguegarao’s role as the Regional Government Center and Center of Commerce in Northern Luzon.

Given its role as the seat of the provincial and regional government, the city serves as commercial and institutional hub. Thus, trade and service establishments together with industrial and tourism-related activities mushroom in the area. On the average, about 142 additional business establishments are registered every year reflecting an average increase of 7.83%. Thus, as of 2006, there were 5,709 registered business establishments for which more than half are located in the Poblacion and less than one-third (1/3) are in the urban barangays. Of the 5,709 registered establishments, 53.48% or 3,053 are wholesale and retail trade establishments. Financing, insurance and real estate firms contributed 488 or 8.54%, and the remaining 2,168 or 37.98% consist of service enterprises and social amenities to include business, recreational, personal, utility and other services. At present, there are 31 banks operating in the city.

As the Economic Center of Region 02, banking, educational and commercial entities proliferate in the city.

The city is an ideal location for regional or provincial branches of big companies. Farm-related businesses especially feed milling and food processing have great potential for growth. The art of making noodles should be modernized to produce in commercial quantities the distinctive PANCIT BATIL BATUNG brand especially made in Tuguegarao and develop it for the export market. As the trading hub of the province, it would do well to invest in the real estate potential of the city especially in the new development site in the western part of the city. Finally, the presence of many intitutions of higher learning makes it imperative to jumpstart the technological ascendance of this northern city by investing in business process outsourcing and other technology related ventures.