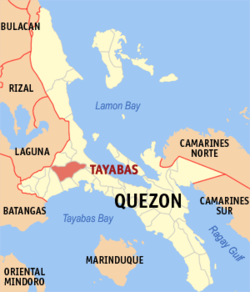 “The City of Festivals”

On March 18, 2007, Republic Act No. 9398, An Act Converting the Municipality of Tayabas in the Province of Quezon into a Component City to be known as City of Tayabas, was enacted into law. On July 14, 2007, the municipality held a plebiscite to ratify the conversion of the said act, with the residents voting in favor of the move, although there was a low turnout of voters for the plebiscite.

But years after that, the cityhood of Tayabas and of other 15 cities were lost after the Supreme Court decided to get it from them because it didn’t reach the qualifications for cityhood.

But on August 24, 2010, in a 16-page resolution, the Supreme Court reinstated its November 18, 2008 decision striking down the Cityhood lawsmaking Tayabas a municipality again.

The most recent development in the legal battle surrounding the “League of 16” came on February 15, 2011. Voting 7-6, the Supreme Court ruled that the 16 towns can stay as cities. It is the fourth time that the Supreme Court ruled on the case, and the third reversal, something that is unprecedented in its history. It said the conversion of the 16 towns into cities met all legal requirements.

Located at the southeastern foothills of Mount Banahaw, Tayabas is bounded on the north by the town of Lucban, on the east by Atimonan, on the south by Lucena City and Pagbilao, and on the west by Sariaya. The city occupies a total land area of 230.95 km2 (89.17 sq mi).

The city has a total land area of 301 square kilometers, most of which are rural areas devoted to agriculture.

Tayabas is known for its weaving industry. Other cottage industries include production of lambanog wine, macapuno candy, furniture and automotive shops.

The city is a potential spot for small and medium enterprises which include coconut processing like virgin coconut oil and oleochemicals, essential oil and fragrances, furniture and fixture, hotels and resorts, cacao and coffee production and processing and demonstration farms.