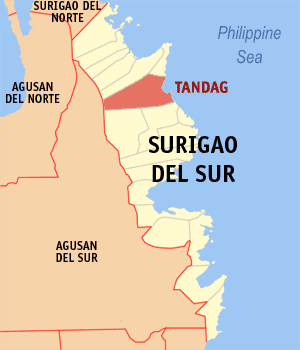 Before Tandag became a bustling city, it was first inhabited by the Manobos and the Mamanwas who lived along the river banks under the leadership of their chieftain, Suba. When the Spaniards introduced Christianity, Suba and his people were converted. After Legaspi’s final conquest to the Philippines particularly on 1609, the Spanish government sent missionaries to subdue the hostile natives. One of these missionaries was Fr. dela Vega who erected a stone fort and built a small settlement about a size of a football field enclosed by a stone wall. Out of this settlement rose the town of Tandag, which later on became a center of faith.

By 1650, Tandag became the capital town of Surigao of Caraga, then a district that covered the present provinces of Agusan, the two Surigaos and a part of Davao. As center of faith and capital town, Tandag was fortified with cottas which were erected sometime in the 18th century, within the northern part of the town and near the old cemetary at the western side. These fortifications served as a protection against the attacks of the Moro pirates. However, Tandag still didn’t escaped the attacks of these pirates where the town was almost destroyed.

It was through the Republic Act 2786, an act that created Surigao del Sur and whose salient measure made Tandag the capital and seat of the provincial government of Surigao del Sur. On June 23, 2007, Tandag became a city by virtue of RA 9293.

Farming and fishing are the main economic activity for most of the people in Tandag. Chief farm products are rice, corn, coconut, abaca, and cacao. Livestock and poultry raising are also important sources of income.