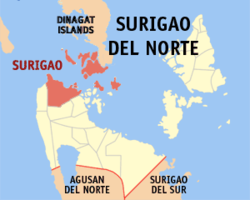 Surigao City was known before as “Banahao”, according to the writings of Fray San Juan Francisco de San Antonio written on 1738. He described Banahao as located at the northern head of Mindanao within there is a good port for ships called Bilan-bilan.

Before, banahao was part of the old district of Caraga which became the Politico-Military District with Tandang (presently, the capital of Surigao de Sur) as its capital. In its original size during the Spanish era, Surigao de Sur, Surigao de Norte up to Gingoog River in Misamis Oriental according to the Philippine Commission Report of 1901, Surigao was ten time bigger that Rhodes Island as three times bigger that Connecticut. Because of repeated attacks by Moro pirates, the provincial capital was within the defensive perimiter of the Spanish Naval Squadron in Cebu and Ozamis.

Surigao officially became a town when it became the permanent residence of the Recollects on February 1, 1751 when all the canonical books were moved from Siargao to Surigao.  “The first canonical books bore the signature of Fr. Lucas dela Cruz.”  Previously, the place was Justa “Vista” of the Parish in Caolo (Siargao).

Surigao is named after the old province (district) of the same name (Surigao).  There are many versions regarding the meaning of Surigao:  how this was derived.  Like Sulo which names current (Sulog).  Surigao probably came from Spanish word Surgir, meaning swift water or current.  With the division of Surigao into two province, Surigao del Sur and Surigao del Norte, the municipality of Surigao became the capital of Surigao del Norte.  It became a chartered City on August 31, 1970.

Year 2011 was marked by the rapid growth in the population of Surigao City with the total of 132,151. These natives speak Surigaonon as their native language. It has a similarity with the Cebuano dialect but staunch Cebuano speakers can hardly understand people who speak Surigaonon. There is no doubt Surigaonon existed as pure and distinct, slowly pelted overtime by Visayan words as migrants settled in the area. Today, Surigaonon is the most widely spoken language inherent in the entire Caraga region.

Surigao City, with a total land area of 245.34 km2 (94.73 sq mi), is marked by rolling hills that gently buffers its eastern and western boundaries. To the southwest towers the Kabangkaan Ridge which divides the city from the municipality of San Francisco (formerly Anao-aon). Kinabutan River ( otherwise known as Surigao River) meanders Surigao valley before it empties to the Surigao tidal basin, a shrinking mangrove swamp fast overtaken by the city’s expansion. It has an average elevation of 19 meters or 65.5 ft. above sea level. The highest elevation on the mainland at the Kabangkaan Ridge has a peak elevation of 465 meters above sea level. Along the border of Tagana-an is Mapawa Peak with an elevation of 245 meters above sea level. Barangays Cabongbongan, Nabago and Capalayan are at the foot of its slopes.

The city’s primary agricultural produce includes rice, corn, vegetables, rootcrops, coconut, copra and bananas. It is a major supplier of fish and crustaceans; its exports reach buyers as far as Hong Kong, Japan and China. A tuna canning factory is planned, a first in the Caraga region.

Surigao City offers exciting opportunities for the courageous businessman. The city’s tourism potential is enormous. There are also fertile agricultural areas surrounding the city. In addition, the city is near forested mountains which provides raw materials for various industries such as furniture and wood carving. The fishing industry can be developed further by introducing mariculture.