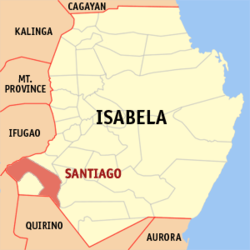 Santiago was originally a part of the province Cagayan (comprising the whole Cagayan Valley region), which was reorganized as a political subdivision in 1583 with Nueva Segovia as its capital. It was named after its patron saint St. James the Apostle. On May 1, 1856, when the Province of Isabela was carved out by a Royal Decree, Santiago was among the towns relinquished to the newly created province. The first five barrios after the Cadastral survey in 1927 were Patul, Batal, Nabbuan, Buenavista and Dubinan.

It was said that there were only about three Filipino-owned sari-sari stores in Santiago in 1917. The settlers acquired most of their merchandise and other provisions from Chinese traders in Echague, the landing zone for products intended for Santiago and other towns, owing to its proximity to the Cagayan River.

Santiago continued to progressed until it was converted into an independent component city.

The total land area of Santiago City is 275.00 km2 (106.18 sq mi). The total land area the city is 80% flat or nearly level land in the portions of northwestern, eastern and western parts of the city. While adjacent areas have gently undulating and moderately rolling areas, and the remaining areas constitutes steeply undulating and rolling lands. The Balintocatoc Hills is the highest point in the city. As of 2010, the population recorded was 132,804.

Some of the biggest companies that can be found in the city are Vista Land-Camella Isabela, ABS-CBN, GMA7, San Miguel Corp., Pepsi Cola, Purefoods, Digitel and PLDT. The National Food Authority also maintains its presence in the city, competing with local traders as a strategy to stabilize prices. Different Car companies like Mitsubishi, Toyota, Nissan, Isuzu, Hyundai, General Motors, other car companies as well as Yamaha and Honda Motors maintain their presence in the city. Kia Motors and Ford Mazda are set to open their branches in this city soon.

Santiago also houses some of the biggest and highly equipped hospitals in the region.

Agriculture however is still the main source of livelihood. The main crops are palay, corn, high value fruits and vegetables. The city is where imposing grain stations can be found, buying agricultural crops coming from Ifugao, Kalinga, Quirino, Nueva Viscaya, and parts of Isabela. These crops are later transported either to Nueva Ecija, Bulacan, Pangasinan or Batangas. In addition to the city’s new product is Muscovado sugar. The city aims not only to sell this product locally but also to export the same. Rice mills are also present.