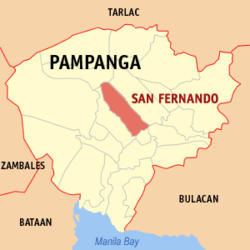 San Fernando is also considered the birthplace of the labor movement in the Philippines. On 1872, in protest against the abuses of their plant foremen, the first organized strike was said to have been staged by a gremio of printers from government press located in the town. The first labor union known as the Union de Lithografos y Impresores de Filipinas (ULIF), organized and headed by Hermegildo Cruz was also established in San Fernando in the printing plant of La Independencia, edited by General Antonio Luna. The socialist movement would later find its roots in the town during the early part of the 20th century under the leadership of Pedro Abad Santos.

The San Fernando Train Station was opened as part of the Bagbag-Mabalacat stretch of the Manila-Dagupan Railway system on February 23, 1892. This event signaled the beginning of the exponential growth of the town brought about by the sugar boom in the province of Pampanga. Dr. Jose P. Rizal visited the town as part of his mission to recruit members to the La Liga Filipina on June 27 of the same year.

On September 1, 1896, the municipality was declared in a state of war. This was the result of the Philippine Revolution against the Spanish government. Consequently, Spanish Generals like Diego Delos Rios, Luis Gerraldo, Francisco Castillo, a certain Jaudennes and Ricardo Monet were sent by the Governor General to establish big detachments of soldiers to halt the revolution. In December of the following year, peace was declared as a result of the pact of Biak-na–Bato.

Officially known as City of San Fernando to differentiate it from San Fernando City of La union Province, San Fernando is located at the central part of Pampanga Province in Central Luzon Region. Around 67 kilomters north of Manila, the city lies west of Mount Arayat, along the North Luzon Expressway. The city is only 16 kilometers away from Angeles City and 50 kilometers east of Subic Bay Freeport. Its topography is a broad flatland which is part of the vast Central Plain of Luzon. The city is bounded on the northwest by Angeles City, on the northeast by the town of Mexico, on the south by Sto. Tomas, and on the west by Bacolor town.

Although agriculture is still an important source of employment, the city is fast becoming a commercial and industrial center. Rice, sugar, rootcrops, vegetables, livestock and poultry are the chief farm products of the city. Large manufacturing plants include the San Miguel food and beverage manufacturing complex, Pampanga sugar mill, Coca-cola bottling, and Universal Robina. The city is home to meat processing plants like the famous Mekeni, Pampanga’s Best and Tita’s meat products. Lantern-making is a well-known cottage industry in the city. Other industries include garment-making and ceramics.

Being the crossroads of road networks and its strategic location, not only in Pampanga Province but also in Central Luzon, makes the city of San Fernando an ideal site for a regional headquarter. The real estate industry such as the establishment of commercial complexes, mass housing, office buildings, and tourism facilities has bright prospects in the city. The manufacture of any item not only domestic consumption but also for export is very much welcome here. Investors can also put up technology related industries such as business process outsourcing, animation, and software development. Agri-based ventures such as the production of high value commercial crops and commercial hog and poultry raising are also encouraged.