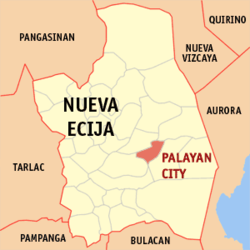 Palayan City was just a Government Stock Farm before it was named on its present name. It was within Laur and Bongabon. The city was one of the 6 cities of the Philippines (namely Manila, Baguio, Quezon City, Trece Martires, Island Garden City of Samal, and Palayan) whose creation was specifically planned by the local leaders and approved by the Congress.

It was on March 25, 1952 that the leaders of Nueva Ecija comprising of congressman, board members and all mayors of Nueva Ecija called a meeting with the desire to talk and plan about the transfer of the capital of Nueva Ecija from Cabanatuan to other municipality. There are several locations suggested, some of which are Gapan, San Jose, Santa Rosa, Guimba, Talavera, General Tinio, Baloc (present-day Santo Domingo), Muñoz, and the Government Stock Farm (present-day Palayan City). After the meeting, the majority agreed that the Government Stock Farm be made as the capitol site.

On June 19, 1965, congress of the Philippines enacted RA 4475 creating Palayan City as the new capital of Nueva Ecija. While the stock farm is not virtually rice land, ”Palayan” was chosen as its name, the province being dubbed as the Rice Granary of the region and the country. Finally, the city government of Palayan was constituted December 5, 1965 with then Governor Eduardo L. Joson as its Ex-Officio Mayor while the Board Members Constituted its first City Council.

The city is composed of 37,219 total of population as of 2010. Many of its residence are employed while outside the urban area, people are engaging in agriculture and inland fishing.

Total land area of the city is 17,299.80 hectares. Its land is being mainly used for residential purposes. Croplands with 1,894 hectares are used for pasture, forest, inland fisheries and other industries. There are also rolling hills, terrains and mountains in the city, all used for agriculture and other related industry.

The income of the city are mainly came from agri-based industries like rice and corn-based food processing, herbal processing, meat and livestock processing, organic fertilizer production, ice plant, cold storage (for onions), feed mill plant and industries that is into packing, production of materials and commercial warehousing. Other industries like telecommunication firms are also available in the city.

Palayan City offers opportunity in the production and processing of high value commercial crops such as mushroom, munggo beans, malunggay, and herbal plants. Investors can also explore the viability of putting up demonstration farms and recreational facilities.