“The Cradle of the Philippine Republic”

Malolos City is a first class urban component city in the Philippines. It is considered as the 115th city in the country. It is also the capital city of the province of Bulacan. 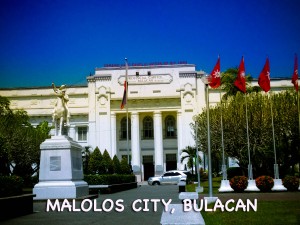 he name of Malolos was presumably derived from the Tagalog word “Paluslos”, meaning ” downwards”. The name resulted from a misunderstanding among the first Spanish missionaries who reached the place. Searching for inhabited places along the Calumpit River, these priests came upon some natives of a riverside barrio (now Kanalate). They asked for the name of the place. The natives, not knowing the Spanish tongue, answered that the flow of the river in that part was downstream -“paluslos”-, which the Spaniards pronounced “Malolos”. Corruption of the word through the years led to present “Malolos”.

The town originated from a small settlement started by the Spanish missionaries. Later, after clearing forests and virgin lands, the settlement grew, and the population increased. After the construction of a big church, the place was made into a town. From the very beginning, Tagalog made up the majority of the Malolos populace. They were led by prominent families, among them the Gatsalians (Gatchalian), and the Manahans.

To cite all the historical events that transpired in Malolos, one could very well fill a good-sized book. The major events especially those that revolved around the first Republic, cannot be left unmentioned.

The majority of the Maloleños (or Malolenyo in Filipino) traces their roots to Tagalog ethnicity although there are also Kapampangan, Ilongo, Muslims, and other ethnicities who migrated to the city. The vernacular language is Filipino, in the form of Tagalog, while Philippine English is the language most widely used in education and business throughout the city. Although Malolos is the city where the Filipinos established the Spanish as their only official language in the first constitution, the native speakers of Spanish still alive are reduced to the very old members of a handful of families.

The City of Malolos is rapidly becoming industrialized due to its proximity to Metro Manila. Many corporations put up industrial plants and sites, and commercial and banking establishments in key places of the city. Malolos also serves as the Banking Capital of Bulacan, in prominent areas of the city particularly in Paseo del Congreso Avenue, the city houses a total of 41 banks.