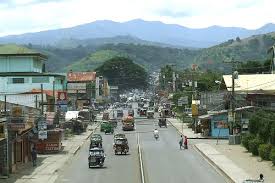 In the early days, Digos was a watercourse, a meeting place of inhabitants belonging to the Austronesians settled along the southern foothills of Mt. Apo. The rivers near the place was used by the people for fishing and bathing.

Digos in later years, before its conversion into a city, was regarded as the capital town of the Province of Davao del Sur, long before it gained the status of a First Class Municipality in 1993, being center for trade, commerce and education, accruing to its strategic location at the cross point of two principal thoroughfares in the south.

Municipality of Digos was changed into a component City of Davao del Sur, which was signed by President Joseph E. Estrada on July 14, 2000 and ratified by the Digoseños on September 8, 2000.

Digos City’s land area ranges from hilly to mountainous in the north-northeast portion and flat and slightly rolling at the coastal barangays. The urban areas and the surrounding barangays in the south portion are flat. Climate in Digos falls under fourth type while wind direction is prevalent from northeast to southwest.

Being the largest urban center in Davao del Sur, Digos City is a good place for investment in the businesses such as housing projects, hotels, resorts, amusement parks, food establishments and processing, clothing and fashion accessories, financial services and electronics related businesses.