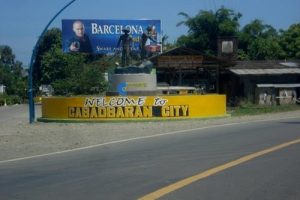 Cabadbaran’s pre-Spanish history can be traced down to 1,200 AD due to some traces of 12th century villages along waterways of the city. There are also artifacts of these pre-Spanish villages that can be found at the Cabadbaran City Artifacts Gallery, housed at the City Library. However, we have no records of what transpired in the city during the pre-Spanish years in the city.

Archival records showed that Cabadbaran was first mentioned in history as a small village chosen by Spanish authorities to become a new reduction which they called “La Reunion de Cabarbaran” in 1867. Added to the existing small population at that time were the inhabitants of Bunawan, Talacogon & Solibao who were coerced by Spanish authorities to migrate to La Reunion. Ten years later, in 1879, La Reunion was disbanded. Those from upper Agusan went back to their places of origin and the remnant population were attached to the town of Tubay.

The industry in Cabadbaran grew as they continued to produce abaca and rice. By 1930, local transportation became known in the town as the Agusan-Surigao road became serviceable. Among the bus lines that contributed to the towns economy was the MASTRANCO. When the Japanese entered the town and when the World War II started, the whole economy was affected.

When the independence was granted to the Philippines, the economy in Cabadbaran also boomed. Gold mining and logging contributed much for this growth. And by July 28, 2007, Cabadbaran became a city upon issuance of R.A. 9434. 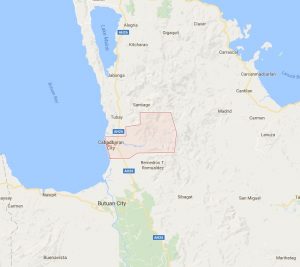 Cabadbaran lies 9 degrees north latitude and 125 degrees and 30 minutes east longitude on the northeastern part of Mindanao. Its boundaries are Tubay to the north, Butuan Bay to the west, Magallanes to the south, Madrid, Surigao del Sur to the east. It is 29 kilometers away from Butuan City. It is generally flat with rolling hills and swamplands in its western part. The highest of all mountains in Caraga Region, Mt. Hilong-hilong (located 2,012 meters above sea level), rises in this city.

The city belongs to the Second Climatic Type of the Corona Classification. No definite dry season in the place and maximum rainfall occurs from October to January. The average annual rainfall is 171.29 mm, average annual temperature 27.5 degrees.

The city has also a booming economy based on agro industry, commerce and trade, source of several export and industrial products; it has also varied ecotourism destinations ranging from Caraga’s highest peak, mile long tunnels to adventure tourism sites.

Easily accessible from the cities of Surigao and Butuan, the City has modern transport, communications, banking and accommodation facilities that could provide all the convenience a modern traveler needs.