Batangas City is the largest and capital city of the Province of Batangas, Philippines. The city is also known as the “Industrial Port City of CALABARZON” and is currently classified as one of the fastest urbanizing cities of the Philippines.

Due to migration, the first Spanish missionary first came to Batangas. It was in the year 1581 that the Spanish authorities created a pueblo in the area. The town was then named as “Batangan” because of huge logs, locally called as “batang”, which abounded in the place. The first governadocillo was an appointee of the Spanish government by the name of Don Agustin Casilao.

When the Americans came in the early of 1900s, local civil government of Batangas was organized. Jose Villanueva was elected as “Municipal President” July 4, 1901.

However, when the Japanese came and when the war broke up, Batangas was among those who didn’t escaped the distruction. The city was severely damaged during the Japanese A6M Zero bombardment with the Batangas Airport totally destroyed. December 12, 1941 a man with the name of Roman L. Perez was appointed by the Japanese authority to be the Mayor. 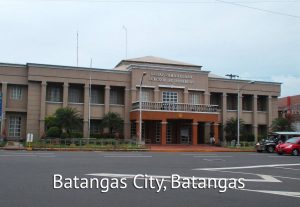 Batangas City is known for their meat products especially beef. Best delicacy for this meat is bulalo. They also take pride of their Kapeng Barako of its world-class quality of strong aroma.

The City of Batangas gears up activities on trade, finance, education and medical services for most part of the province . As a center for trade and commerce, it hosts one of the largest oil refineries in the country, Pilipinas Shell, and three natural gas power plants, namely, Keilco, First Gas and Malampaya On-Shore Gas Plant. Other major industries include: San Miguel Food Corporation, JG Summit Petrochemical Corp., Universal Robina Corp., Himmel Industries Inc., Chemphil Bulk Terminal, San Lorenzo Power Plant and First Philippine Industrial Corp. It is the center for education, with three of the largest universities in the province and recently, more International Schools have chosen the City as their campus sites.

The City draws thousands of transient and migratory workers, with 46 banking and other financial institutions, 4 major hospitals and 3 major hotels and various government agencies.