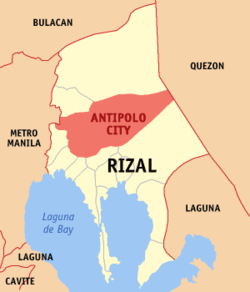 Antipolo City was named after tipolo (breadfruit) tree, which was in abundance in the area. It was the Franciscan missionaries who first build the church in the area, in 1578.  However they were replaced by the Jesuits. These new missionaries were the one who helped organized the village into a parish. By 1601, the Christian population of Antipolo increased to 3,000 due to the people of Dumagat who came and lived in the area.

In 1650, the village was organized into a town and became part of Tondo Province. When the province was divided in 1853, Antipolo became a part of the District of San Mateo de los Montes, which later became the District of Morong. When the Americans came on June 4, 1899, the Revolutionary Government then transferred Morong’s capital to Tanay. Soon after, the Americans established a civil government in 1901 which was handled by Valentin Sumulong who served as the first municipal president. On June 11, 1901, Antipolo was incorporated into the newly established Province of Rizal, which included the towns of Morong District and Manila Province. In 1903, Antipolo, Boso-Boso and teresa were merged. The town’s territory was expanded again in 1913 to add the sitios of Mayamot and Bulao; just to lose Teresa six years later to become an independent municipality. The Manila Railroad Company inaugurated a railway service to Antipolo on December 24, 1908.

On February 13, 1998 (along with Parañaque, Former Pres. Fidel V. Ramos signed Republic Act No. 8508, making the Municipality of Antipolo into a component city of Rizal Province and on April 4, 1998, it was ratified in a plebiscite. In the election that followed, Angelito Gatlabayan was elected as its first city mayor.

The topography of Antipolo may be described as generally hilly and mountainous, the hilly portions lying in the west and the mountainous area concentrated in the east as part of the Sierra Madre Mountain Range. Well-watered valleys are located in the middle of the city and in the northern and southern edges. Plateaus of over 200 meters above sea level are seen in the western half of the study area, including the site of the Poblacion and portions of Brgy. Cupang and San Juan. In the eastern half, these are seen in Brgys. Calawis and San Jose overlooking the Boso-Boso River Valley to the west.

The city is an ideal place to build resorts, retirement subdivisions, and mass housing. Commercial complexes are needed considering the large population and the influx of tourists. The eastern mountainous areas can be developed as upland demonstration farms for bamboo, fruit and vegetable plantations.